Learn about the Team at Boston Investor Relations, including our Mayor of Boston, Chief Financial Officer, and Senior Deputy Treasurer and First Assistant Collector-Treasurer. 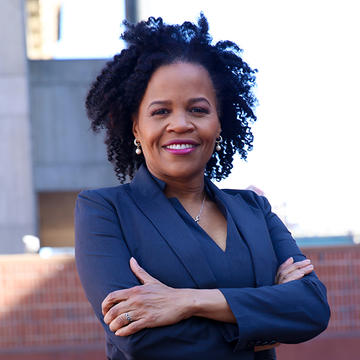 Kim Janey, the 55th Mayor of the City of Boston and a proud fourth-generation Roxbury resident, comes from a long line of educators, entrepreneurs, artists, and advocates. Mayor Janey was raised with values that guide her to this day: the importance of education, the power of community organizing, and the fundamental principles of equity and justice.

Mayor Janey became a mother in high school and worked hard to give her daughter everything she needed to succeed. She began her advocacy on behalf of children inspired by the interconnection of her own daughter’s experiences with those of other children. In her role at Massachusetts Advocates for Children, Mayor Janey championed systemic policy reforms to increase equity, excellence, access, and opportunity in Boston Public Schools. She placed a special focus on eliminating opportunity and achievement gaps for children of color, immigrant children, students who are learning English, children with special needs, and those living in poverty.

Mayor Janey’s own education followed a path familiar to many Boston residents. After attending the New School for Children, her parents enrolled her in Boston Public Schools. In middle school she had rocks and racial slurs thrown at her during the tumultuous busing era. Later, Mayor Janey attended Reading Public Schools through the METCO program, where she was one of two Black students in her graduating class. Mayor Janey went on to attend Smith College as an Ada Comstock Scholar, but withdrew to care for her grandfather.

Mayor Janey has been recognized for her service with a number of awards, including the Boston NAACP Difference Maker Award in 2015 and the coveted Sapphire Award in 2017. She was named one of Boston’s Most Impactful Black Women in 2021. Mayor Janey is the proud mother of daughter Kimesha and a grandmother of three. She lives in Boston’s Roxbury neighborhood.

As Chief Financial Officer, Emme Handy serves as the Chief of the Administration and Finance Cabinet. In this role, she is responsible for sound fiscal stewardship of the City's human and financial resources to support the long-term growth and stability of the City. Her financial responsibilities include debt and investment management, financial reporting, budget development and oversight, tax administration, and administration of enterprise-wide financial systems. As Collector-Treasurer, she is the custodian of more than 300 City trust funds. Handy oversees many departments, including Assessing, Auditing, Budget, Community Preservation, Human Resources, Labor Relations, Purchasing, Registry, the Retirement Board, Collecting, and Treasury.

Emme Handy joined the City of Boston after serving as the Senior Director of Financial Planning and Analysis for the Broad Institute of MIT and Harvard, a scientific organization focused on improving human health. Prior to that, Handy served as Budget Director for the Commonwealth of Massachusetts and as legislative staff for the Massachusetts Senate Committee on Ways and Means.  Handy is a Northeastern University graduate.

As the department head of Treasury for the City of Boston, Drew Smith is responsible for the management of revenue and distributions, management of the City's long-term debt and trust funds, and oversight and implementation of all Treasury statutory and regulatory requirements, and City policies and procedures to keep the City of Boston on solid fiscal footing. The Senior Deputy Treasurer is under the direction of the City's Chief of Administration and Finance, and directs and leads all aspects of the City's Treasury Division.

Drew Smith joined the City of Boston after having served as the Deputy Assistant Treasurer for Debt Management at the Massachusetts State Treasury, where he was responsible for management of $25 billion in outstanding debt; between $3-5 billion in annual debt issuance; and roughly $2.6 billion annually in monthly debt service supporting the Commonwealth's capital infrastructure programs and cash flow borrowing needs.  Prior to that, Drew held positions at the Massachusetts Clean Water Trust, the Arkansas State Treasury, and Delta Trust Investments.  Smith is a University of Arkansas graduate.

As Assistant Collector-Treasurer of the Treasury Division for the City of Boston, Richard DePiano assists the Senior Deputy Treasurer in day to day management of all aspects of the Treasury Division and is responsible for assisting and providing advice in the financial operations and administration of city revenue, cash management, banking, financial investments and administration of City trusts. In addition, Richard DePiano works collaboratively with the Senior Deputy Treasurer and division managers to evaluate and identify changes to the Division’s priorities, processes, organization and systems to ensure that the Division’s business processes and functions are consistent with modern and best practices.

Richard DePiano has been with the City of Boston for more than 37 years serving in various capacities in the Assessing and Treasury Departments. Over the last seven years, Richard DePiano has been the City’s Assistant Collector-Treasurer, collaborating with the Senior Deputy Treasurer and Chief Financial Officer.  Rich is a graduate of Boston College with degrees in both Economics and Finance.

Have questions? Reach out to us directly.

Search for Issuers by state, issuer name, or CUSIP.

No results match your search term, but we're constantly adding new issuers to the BondLink platform. Looking to learn more?

Thank you! Looking for another issuer you don't see here?

UNDER NO CIRCUMSTANCES SHALL THE INFORMATION ON THE SITE CONSTITUTE AN OFFER TO SELL OR THE SOLICITATION OF AN OFFER TO BUY, NOR SHALL THERE BE ANY SALE OF SECURITIES IN ANY JURISDICTION IN WHICH SUCH OFFER, SOLICITATION OR SALE WOULD BE UNLAWFUL PRIOR TO REGISTRATION OR QUALIFICATION UNDER THE SECURITIES LAWS OF ANY SUCH JURISDICTION. OFFERS TO PURCHASE SECURITIES MAY BE MADE ONLY THROUGH A REGISTERED BROKER-DEALER AND THROUGH AN OFFICIAL STATEMENT.

BondLink has not prepared or developed any of the Content on the Site and the Content available on the Site with respect to any issuer is not maintained by or under the control of BondLink. The content on this Site with respect to any issuer was specifically authorized by that issuer to be communicated through this Site. BondLink has not reviewed such information in any respect and has not checked such information for accuracy, and in some cases, the information provided may not have been viewed by BondLink. The Content contained on the Site has been provided by the applicable issuer and is included for general informational purposes only and is provided without warranty of any kind and, in particular, no representation or warranty, express or implied, is made or is to be inferred as to the accuracy, reliability, timeliness or completeness of any such information. The Content presented on the Site speaks only as of the date the Content was prepared by the issuer or other third party and has not been updated since that date and as a result, may not address all factors which may be material to an investor and may contain omissions of fact or statements that are not accurate because of the passage of time or changes in facts or circumstance subsequent to the date of such Content. Consequently, no person should make any investment decision in reliance upon the Content contained on the Site. See “Terms” for the full terms of use of this website including your release of any and all claims against BondLink for use of this website.